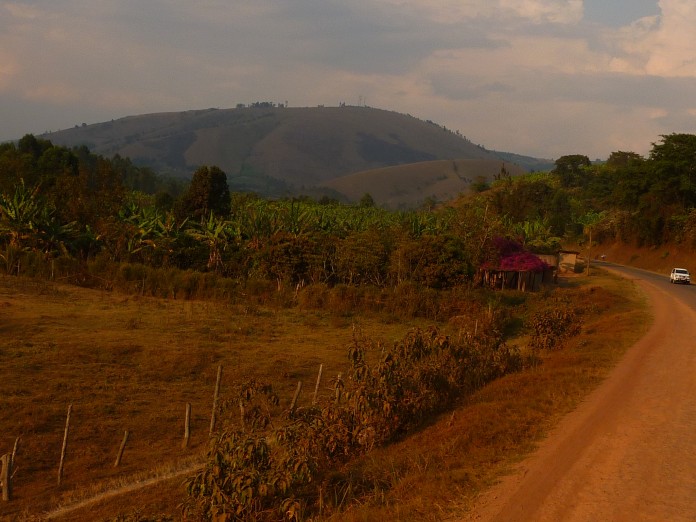 I wasÂ almost a week into my overland tripÂ and the ice had been well and truly broken. Most of the group felt like old friends by now and heading out of Kenya we’dÂ been busyÂ entertaining ourselves on the truck using the quiz book Andy and Caz had brought with them. A bit of ingenius packing as it turned out. 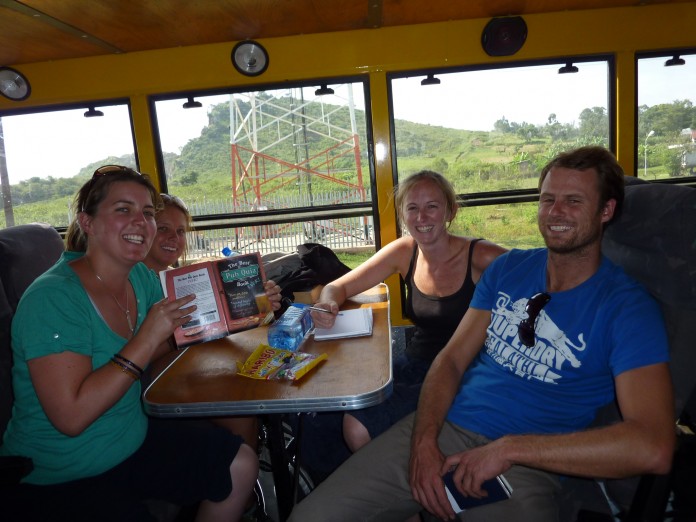 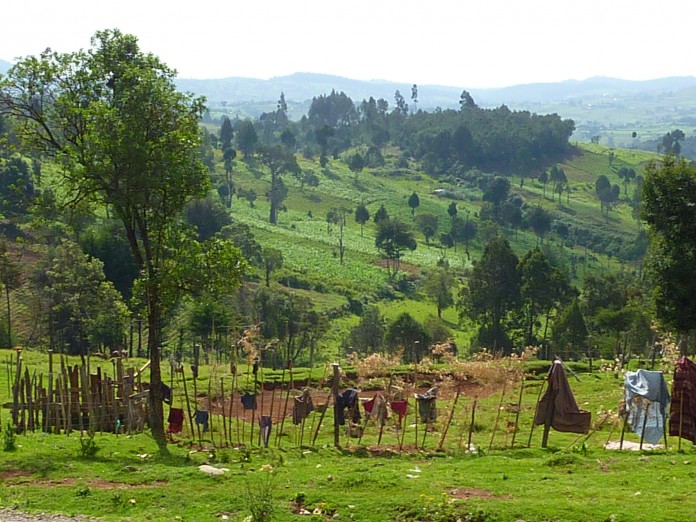 WeÂ crossed the border from Kenya into Uganda andÂ I immediately felt the atmosphere begin to shift. The stares were replaced by smiles and waves. That’s not to say that Kenya was an unfriendly place overall, far from it, butÂ in some places there is a definite air of cynicism towards tourists that seemed to vanish as our big yellow truck rolledÂ through the green hills of Uganda. The quiz book was put away and we turned our attention towards the windows, not wanting to miss a moment of the spectacular scenery. 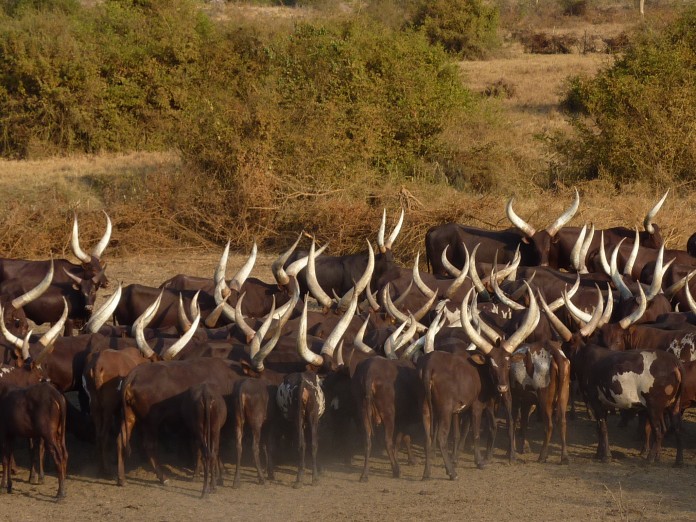 Arriving at Nile River Explorers Camp, we set up our tents and started dinner prep.Â The plan was to have a quiet night before rafting the next day, but we could hear noise coming from the bar so popped in for a quick drink where they were doing a showing the video of the rafting from that day.Â Oh God. What was I in for?

Everyone was nervous and there was a distinct lack of food consumed at breakfast. We were about to face some of the wildest white water in the world, including Grade 5’s, which are the highest grade rapids you canÂ raft commercially.

Things got a little bit more real when we arrived at the Explorers Backpackers in Jinja town where our adventure was to begin.Â TheyÂ talked usÂ through what to do if we came out of the boat and judging by what we’d seen the night before, thatÂ was inevitable.Â Our guide for the day would beÂ Jonnie, an Australian. Amongst the guides was Juma, who would in 2012, be selected by the International Canoe Federation to be part of a demonstration team of freestyle kayakersÂ during the London Olympics. If you’ve ever seen freestyle kayaking, it’s unbelievably impressive. 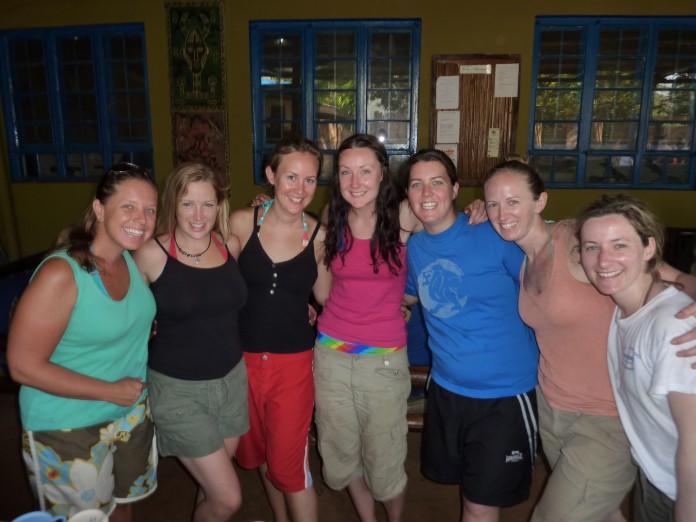 We jokedÂ about the rapids called ‘The Bad Place’ and ‘Silverback’, the ones we’d seen do crazy things to rafts full of people the day before. We joked because we were scared. 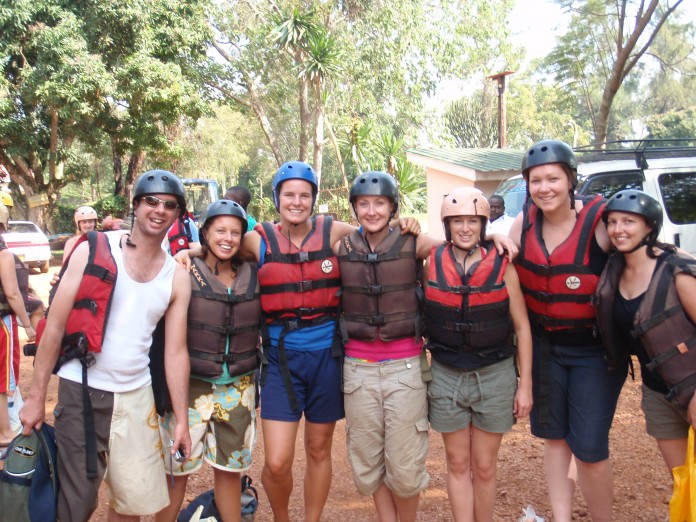 Down at the river we put on our helmets, grabbed our oars and waited. That’s when he appeared. Anton, our Swedish cameraman. TheÂ ladies stopped in their tracks. Literally all of us. 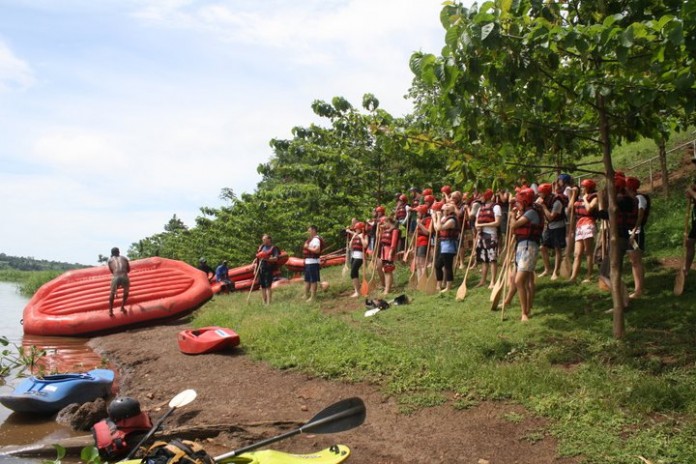 “Has anyone got any sunscreen?” He asked.

WomenÂ all around scrambled, rifling through pockets. All hoping to be the one to tend to his SPF needs.

One of the other guidesÂ handed him a bottle.

Disappointment swept through the group like a mini Mexican wave, until he began rubbing the creamÂ into hisÂ biceps.Â We drooled and giggled, the boys rolled their eyes.Â Anton oblivious the whole time.

Once we recovered, weit was time to climb into our bright red rafts and launch out on to the water where we practiced falling out and getting back in. This was the easy bit.

We made it safely through rapid 1, but not everyone was so lucky. We watchedÂ a couple of the boats flip and this water wasn’t even the wildest we wouldÂ face.

Rapid 2 was a different story. Paddle, paddle, paddle. Jonnie shouted out instructions to usÂ as we headed into the ferocious water, but my mindÂ couldn’t process. What was I supposed to do?Â It was exciting andÂ terrifying all at the same time. “Get down!” We got down, ducking inside the raft, laying our paddles flat against the side and gripping the safety rope that ran along the top.

The water formed like a blockade. As the front of our boat hit it, the right side, my side,Â lifted up. We were tipping and IÂ was suspended up in the air, the water not quite able to flip us yet.Â  Still holding on to the rope, we bounced around for a couple of seconds, which felt like much longer, before weÂ tipped backwards. I took a deep breath before I plunged into the water, my legs going over my head in a backwards somersault.

My paddle was tornÂ from my hands.Â I landed on top of someone, and someone landed on top of me and we sunk down together. My only thought was my teeth! I did not want a paddle to the face. We were spinning. Up, down, I had no idea.

I popped up to the surface.

White water raged all around andÂ our boat was nowhere to be seen. Kate and NathanÂ popped up at the same time nearby, Kate was minus her helmet. We hurtled down the river together. Passing Lucia who was going round and round in a sort of whirlpool. A kayaker appeared and told me to grab on.Â I wrapped my arms and legs around the front and then he paddled over to Kate who wrapped her legsÂ around the back, as we’d been told during the brief.Â Our knight in shining kayak! Not that we were in any real danger anyway.

Woo hoo! That was amazing!

Jonnie had somehow made it back to our raft, turned it the right way up and picked up some of the others already. With me holding onto the side, he ducked me down and hoisted me back in by my life jacket and IÂ slid into the boat with the grace of an elephant seal on land.

Once everyone was in, we compared our ‘near death’ experiences, eager to have more.

Lunch timeÂ provided a chance to rest our weary arms, floatingÂ down the river, drinking water out of big plastic containers, eating freshly cut pineapple and yummy biscuits. We jumped intoÂ the water toÂ get out of the heat, letting our life jackets do the work of keeping us afloat.Â The long stretch of flatÂ water was a welcome relief from ‘the fear’. 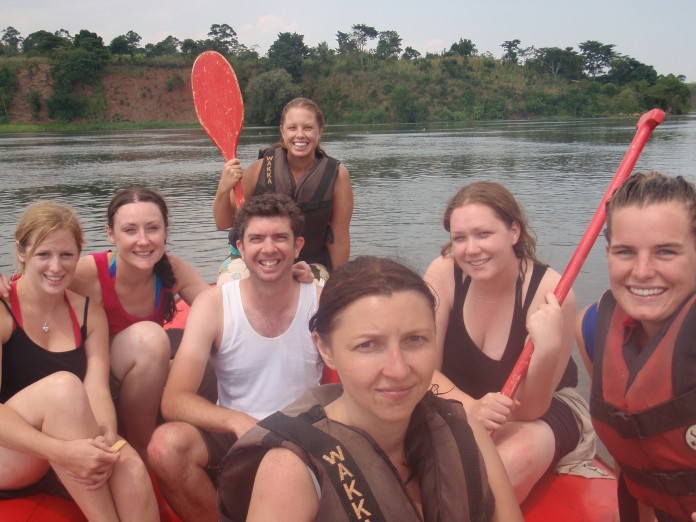 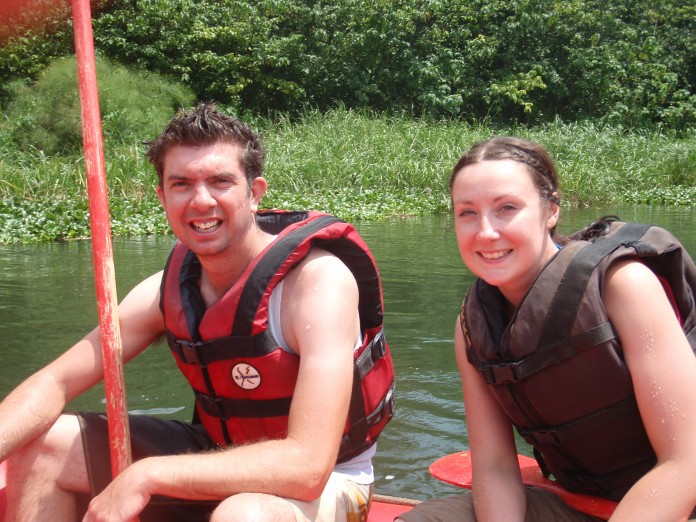 The highlight of the day was a 3 metre waterfall. We watched a few boats go over the edge and out of sight. Disappearing for a few seconds before appearing again on the river below. The anticipation was worse than the actual drop. 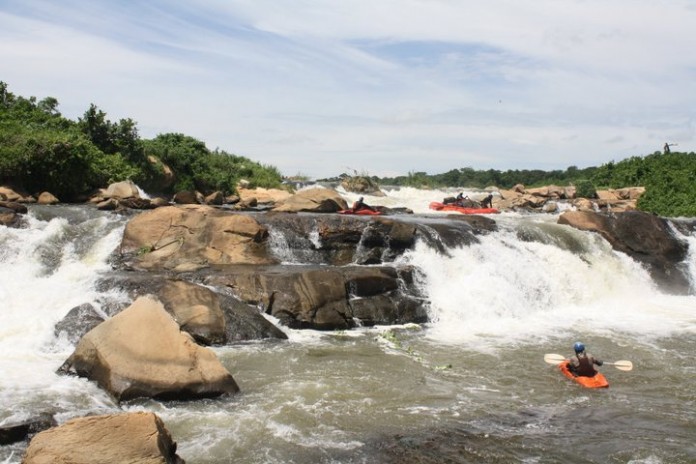 At the bottom the boats and safety kayakers gathered to watch the rest of the rafts take the plunge.Â One raft was spinning as it made the approach. It hit a rock and one of the girlsÂ flipped outÂ and was inÂ the water, clinging on the safety rope at the front of the boat. The guide managed to stop the boat at the top byÂ wedging his paddle between two rocksÂ but the front of the boat had already reached the waterfall andÂ the girl hung over the edge. Her body, literally pressed against andÂ hanging down the rock face.

I can’t imagine how scared she must have felt – it was scary to watch. I doubt she would have been injured as the waterfall isn’t that high,Â however just the thought of going overÂ when you don’t know what is below and then having a raft land on top of you,Â scares the hell out of me.

This isn’t the best picture (it’s a still from the video) but you get the idea! 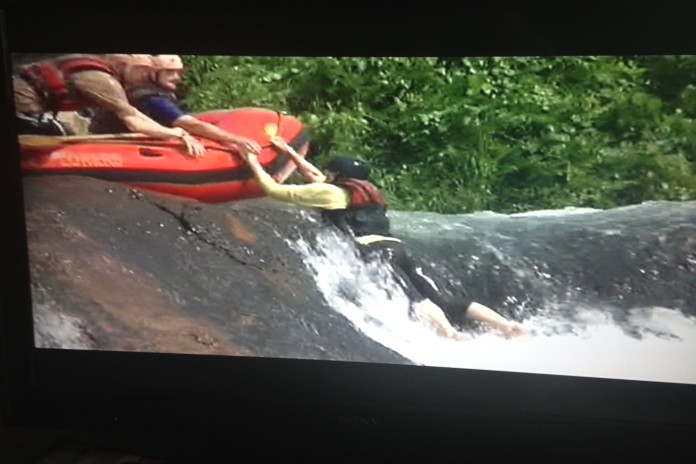 Her team quickly sprung into action and pulled her back into the raft.Â  It seemed much longer but it only must have been second or two before she was back in the boat andÂ I saw her give a little fist pump. They slid down without any problems.

We watched more boats go down. Nobody flipped on this one. 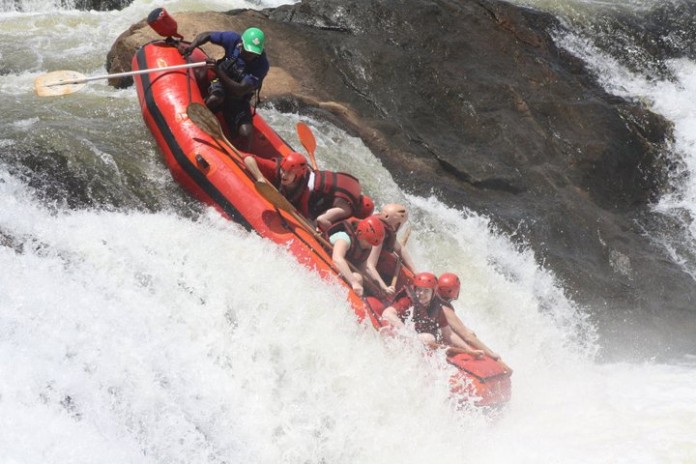 The first part of the last rapid was a grade 6 and we had to get out and walk around it as it was far too dangerous for us amateur rafters. Back in the water we faced our final challenge ‘The Bad Place’. Now this was a fun one. Water swirls around in every direction so boats spin out of controlÂ and bobbing around on top of the water for ages. Some flipped, some didn’t, but everyone had a wild ride. The best part was watching everyone jumping aroundÂ with no controlÂ – especially the guides whoÂ used this as an opportunityÂ to ride their rafts like a rodeo bull, giving a good show for the video. 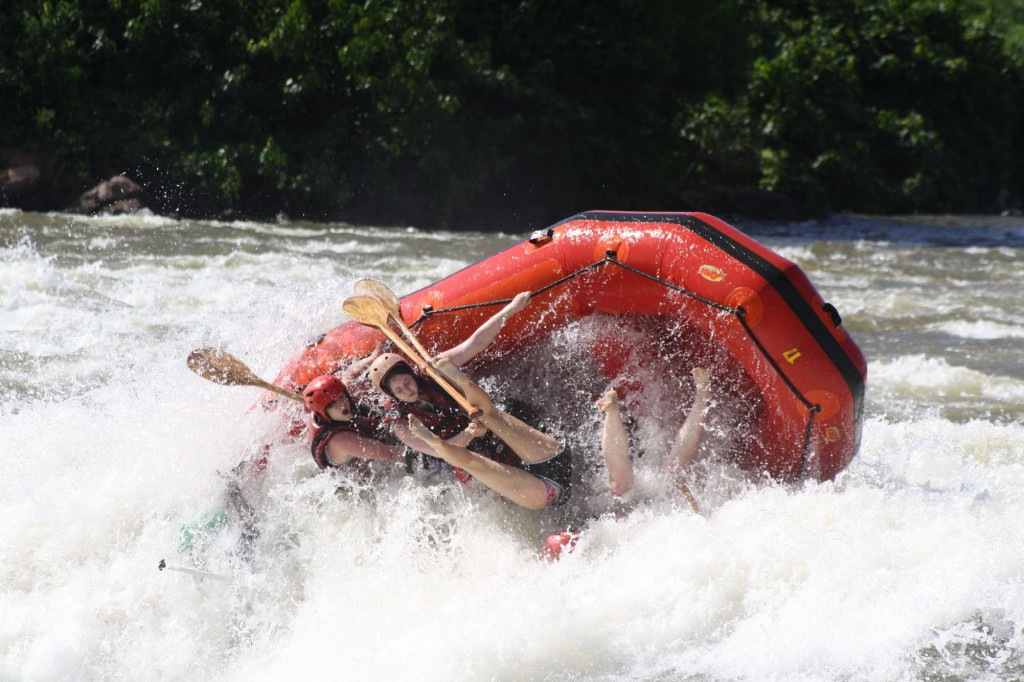 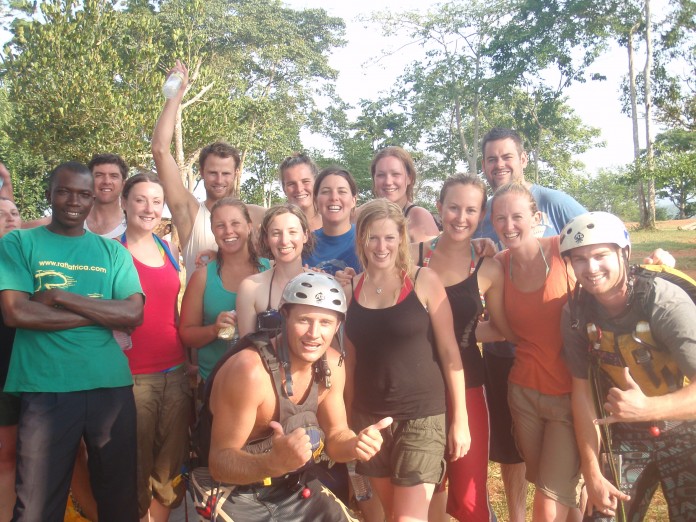 To top off the day, we went back to NRE for a big celebratory buffet. Quite possibly one of my favourite ever meals as nothing builds up your appetite like a day of white water rafting.

Later that night, all of the rafters gathered in the bar at NRE Camp. It was much livelier than the night before and the atmosphere was raucous as we watched the video Anton had put together since we’d been back.

Everyone pointed when they spotted their boats and cheered when the boats flipped. The biggest cheer of the night went to the girl hanging over the edge of the waterfall, unsurprisingly. Speaking to the guides, that wasn’t an every day occurrence and even they were impressed!

The best bit of the video though. Anton. Not because of his good looks, although that did help. His accent sounded part Swedish (he is Swedish), part Scottish and he had an awesome way of introducing each rapid in a sing song way… he was quoted for the rest of our trip with hisÂ saying “Enjoy the riiiiiddddeeee!” 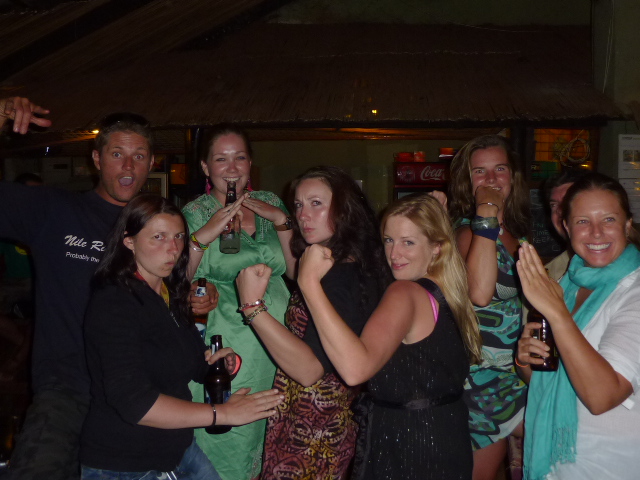 We partied the night away in the bar with theÂ other rafters andÂ guides, dancing, taking turns to play our iPods over the speakers and belting out Foo Fighters, Bon Jovi and Guns n’ Roses. Air Guitar and Blue SteelÂ may or may not have happened… 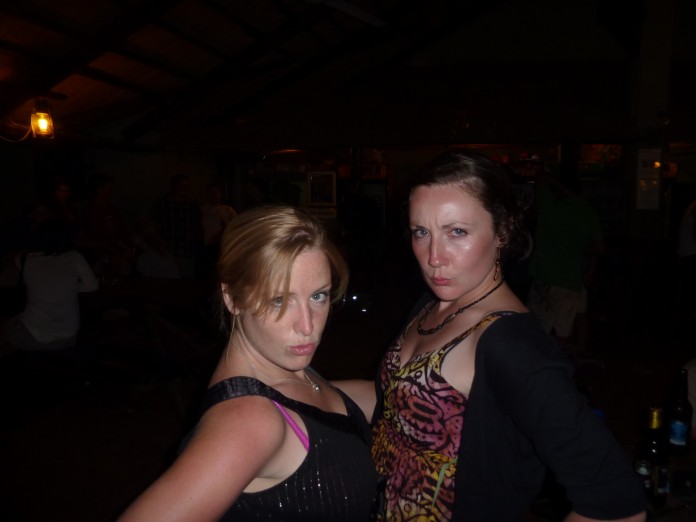 It was a great but exhausting day and I couldn’t wait until we got to go again on the Zambezi when we arrived in Zambia later in the trip!

Have you been white water rafting on the Nile or anywhere else? Any scary moments? 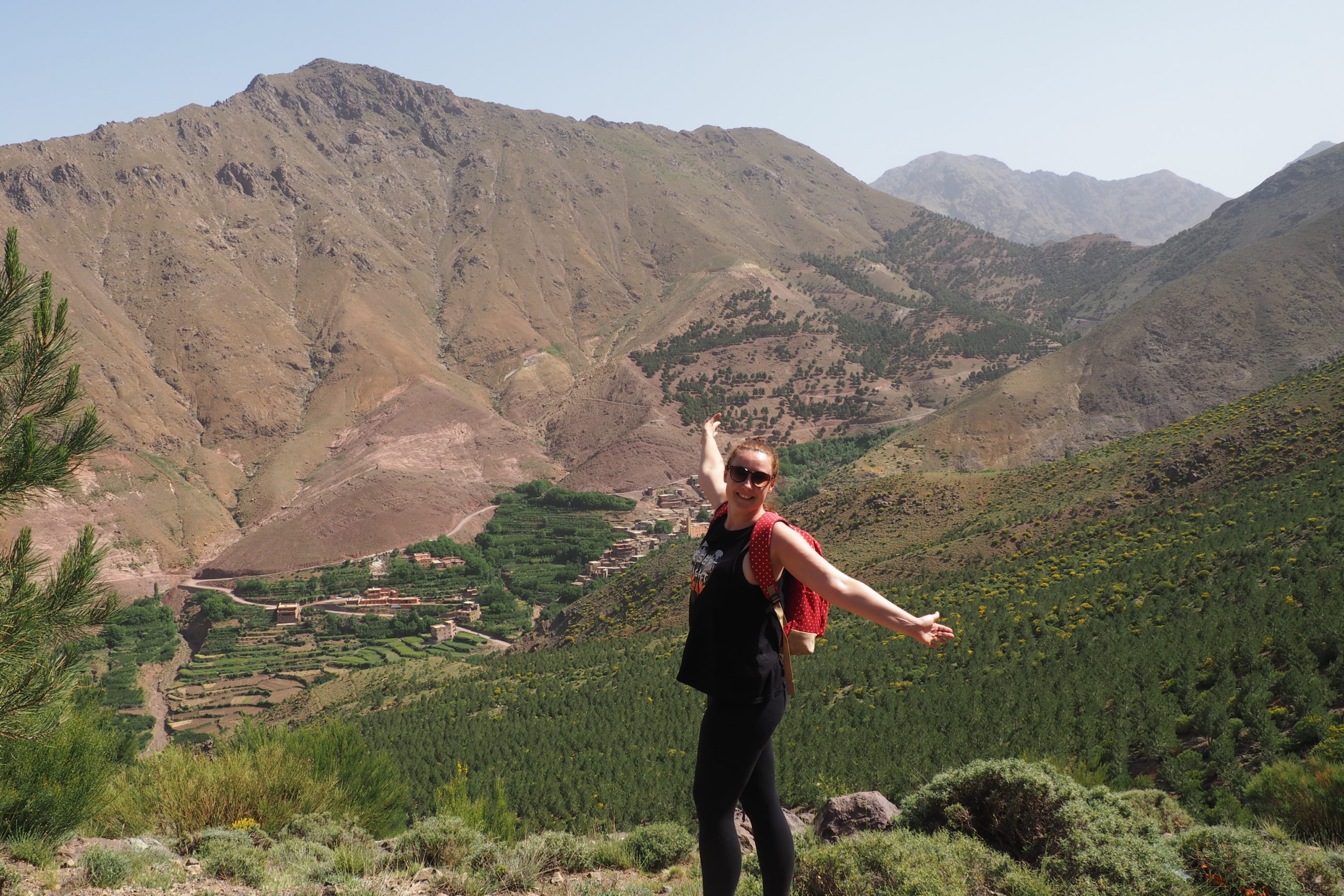 The Perfect 12-Day Morocco Itinerary: From Sea to Sahara 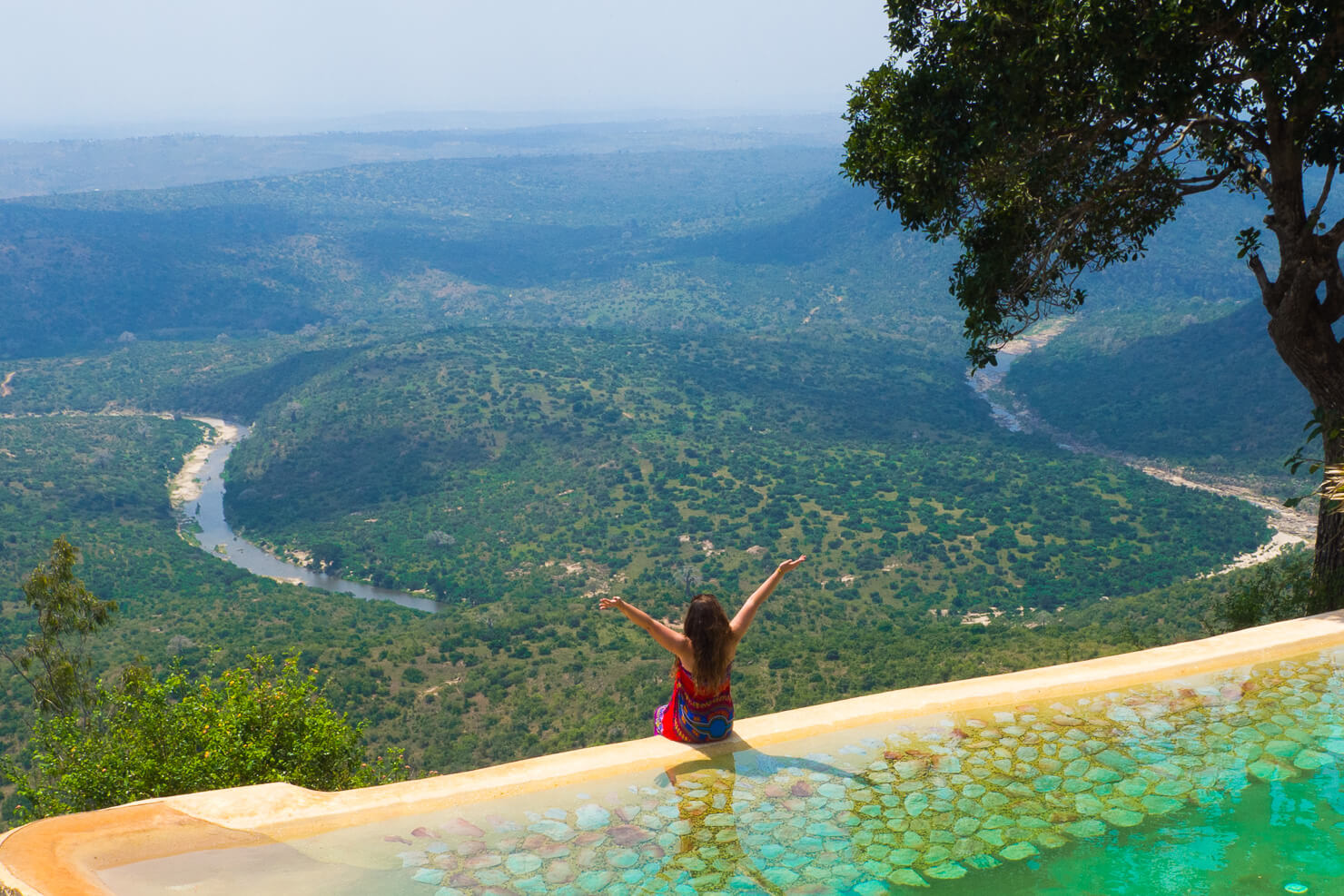 A Magical Kenya Itinerary (Plus Things To See & Do) 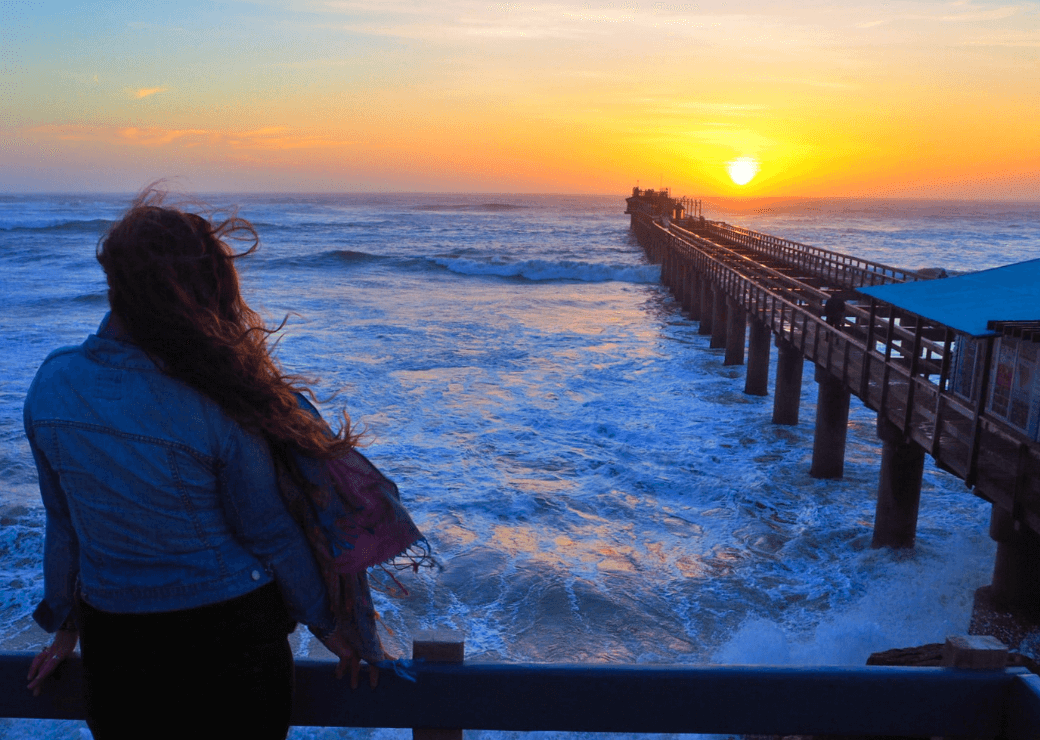 The Day I Met Jedward, Went to the Playboy Mansion and Saw Madonna's Bush

Life Lessons Learned from the Oscars