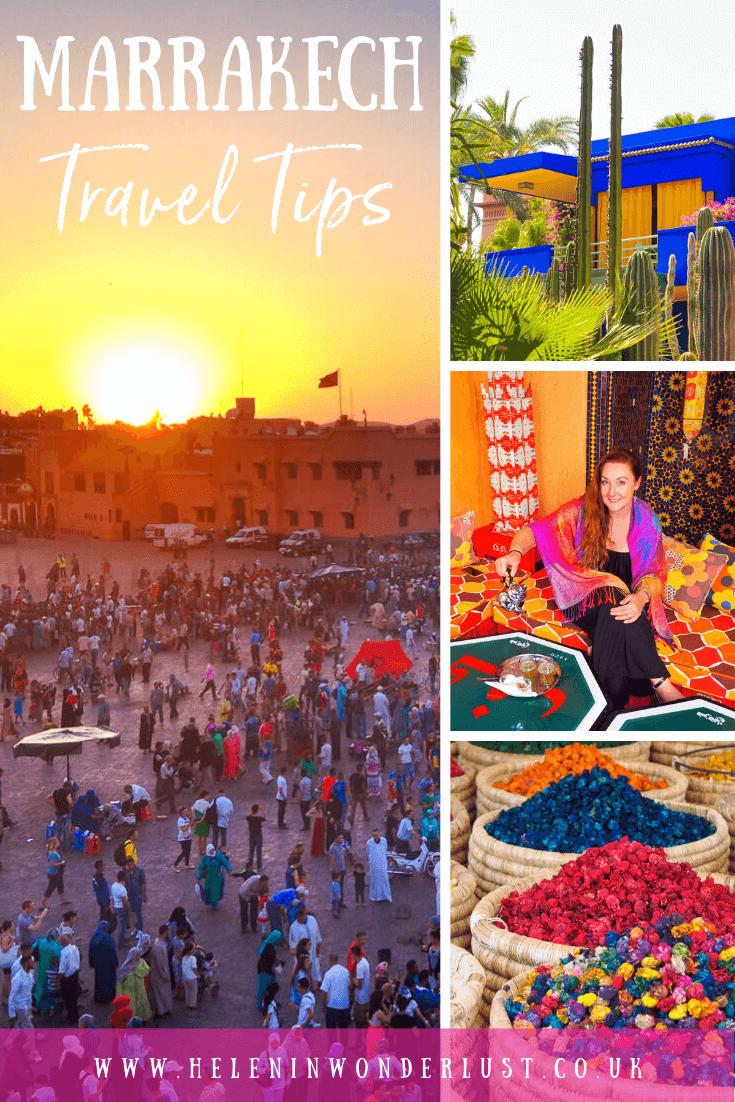 “It is very easy. Turn right out of the alley, walk down the street and at the mosque turn down the alleyway and you will come to a road, turn left and then go straight and you will arrive at Jemaa el Fna.” 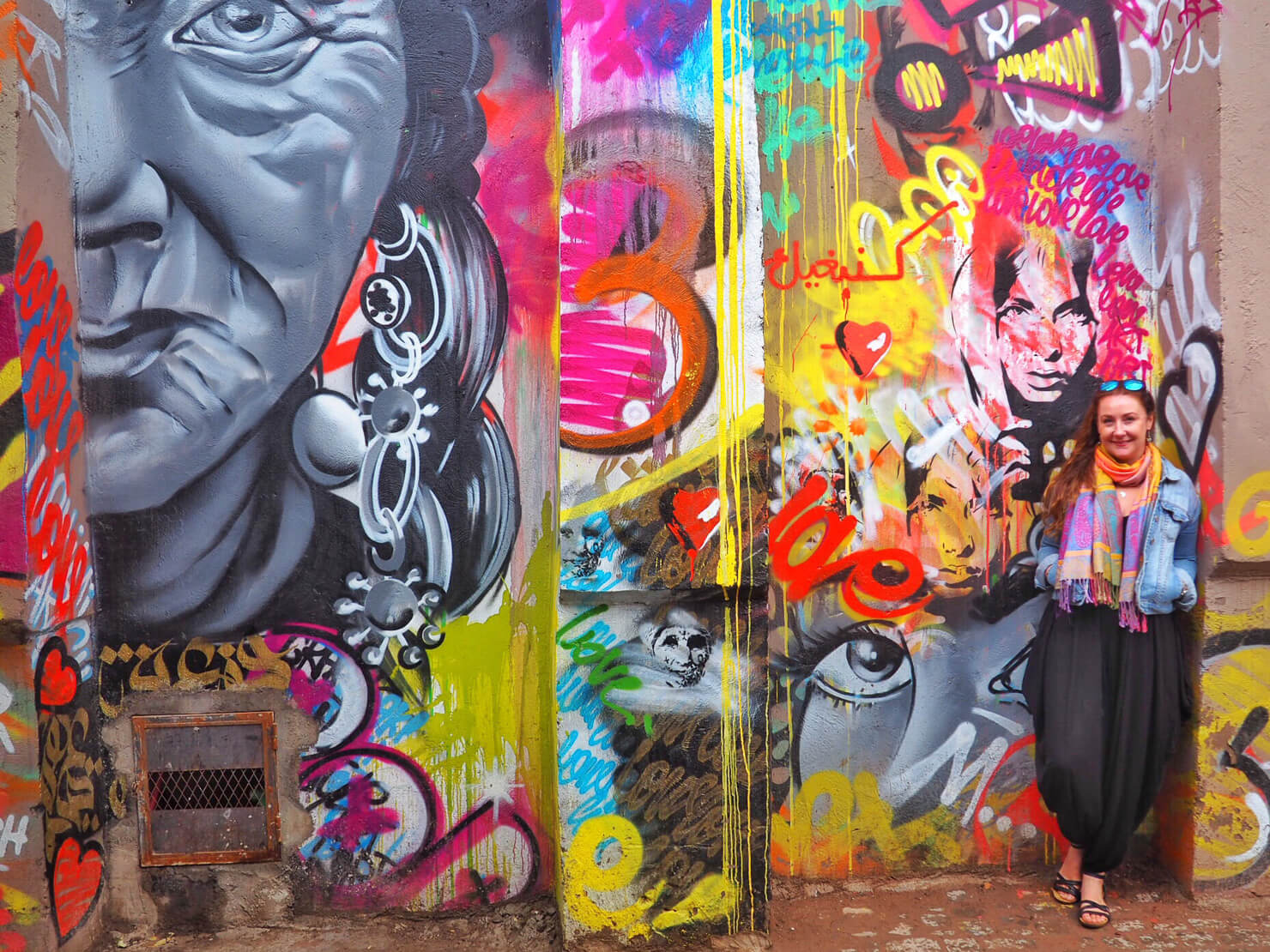 It was our second day in Marrakech, Morocco and my friend Lisa and I were stood in the courtyard of our riad listening to instructions on how to get to the main square. It sounded pretty straightforward. However, having taken a few wrong turns the day before, which resulted in us wandering aimlessly for what felt like an eternity to find the Jardin Majorelle, we weren’t too convinced.

Marrakech is made up of two main parts, the new town, and the old town which is known as the medina. As we only had two days, we pretty much stayed within the medina walls, wandering and getting lost in the alleyways and souks.

On the surface, Marrakech is a crowded, hot, hectic maze that occasionally makes you want to scream. But then you walk through a doorway and find yourself drinking fresh mint tea in a cool, tranquil courtyard, where the outside world and all your troubles seem like a distant memory.

We’d briefly visited Jemaa el Fna on our first day, but by the time we got there, after being pointed in the right direction by about 20 different people, hailing down a cab, driving around the city, being dropped off at a random spice shop because our cab driver thought it was too hot for us to go to the square and have a guy pee right in front of us whilst we were having a Coca-Cola break, we were a bit jaded and tired and decided to head back to the sanctuary of our riad to drink some wine and catch up. 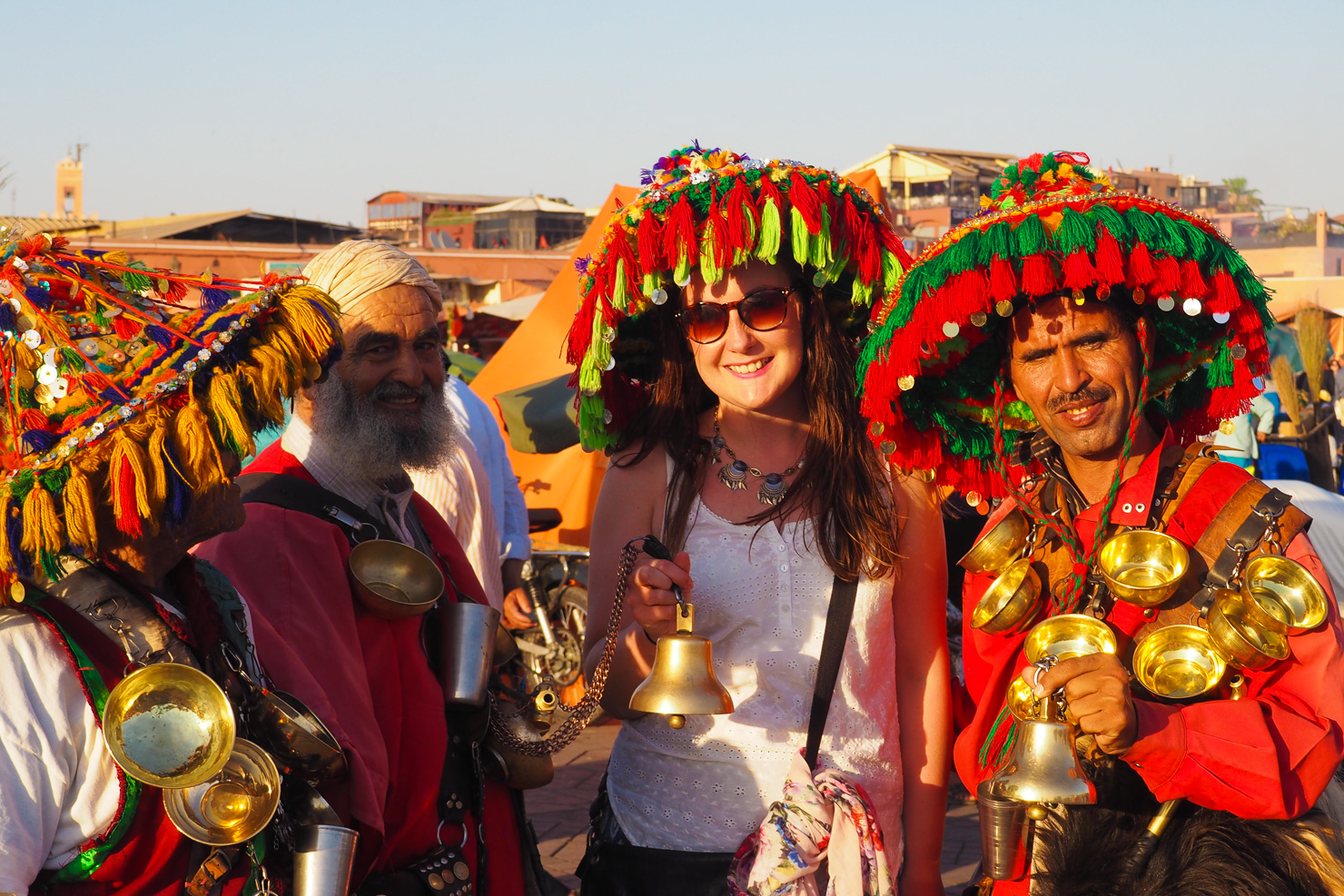 By our second day, we came to the realisation that we were fighting a losing battle with our sense of direction, plus the Marrakech weather had gone a little crazy when we were there and they had a heatwave, so we decided to take a walking tour in the morning with someone who knew exactly where they were going.

We were shown around by Mohammed, a guide arranged through the owner of our riad. He took us on a wonderful trip, expertly navigating the streets and taking us to places we never would have found on our own.

He took us to the beautiful Museum of Marrakech, the Ben Youssef Medersa Koran School, through the souks (markets) that sell anything and everything and on my request, to the place where they filmed Sex and the City 2 (Souks and the City?), the bit where Carrie bumps into Aiden in the market (old Abu Dhabi was really old Marrakech)!

But after lunch, we were alone again. And lost. I could tell that Lisa was feeling anxious and even though Mohammed gave us directions back to the riad, what he said seemed to have no actual bearing on where we seemed to be. 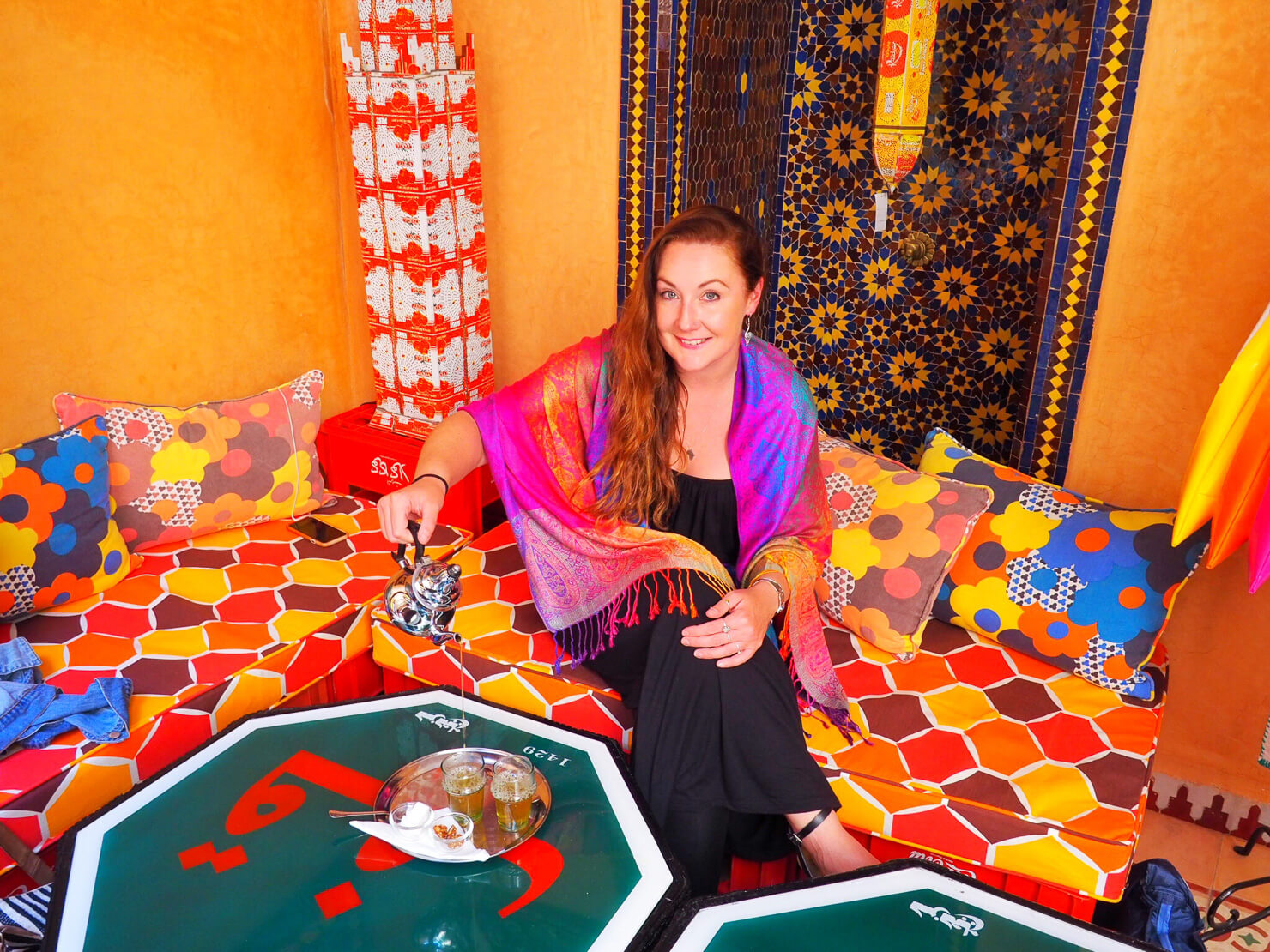 We eventually found our way back, thanks to a tuk tuk driver and a couple of local kids who showed us the way through the last few alleyways, then held out their hands out for a tip and got annoyed when we didn’t give them enough dirhams.

After a shower and a rest, I was keen to see  Jemaa el Fna at night and try out a restaurant I’d heard about but I could tell through her jokes that Lisa was really worried about being lost in the medina. I never once felt unsafe in Marrakech, there were always lots of people about and not once was anyone unfriendly towards us. But, our riad was down a very quiet, unidentifiable street and I wouldn’t want to be lost in any strange city at night and we didn’t have a great track record with this one.

Lisa agreed to come out with me on the condition we got back in one piece.

So as we were told, we walked out of the alley onto the street and we arrived at the mosque and walked into the open courtyard. We went down an alley (there were a few so we took a guess) and onto what looked like a main street and turned left. We walked. But then the road went off in different directions, there was no ‘straight’ anymore. 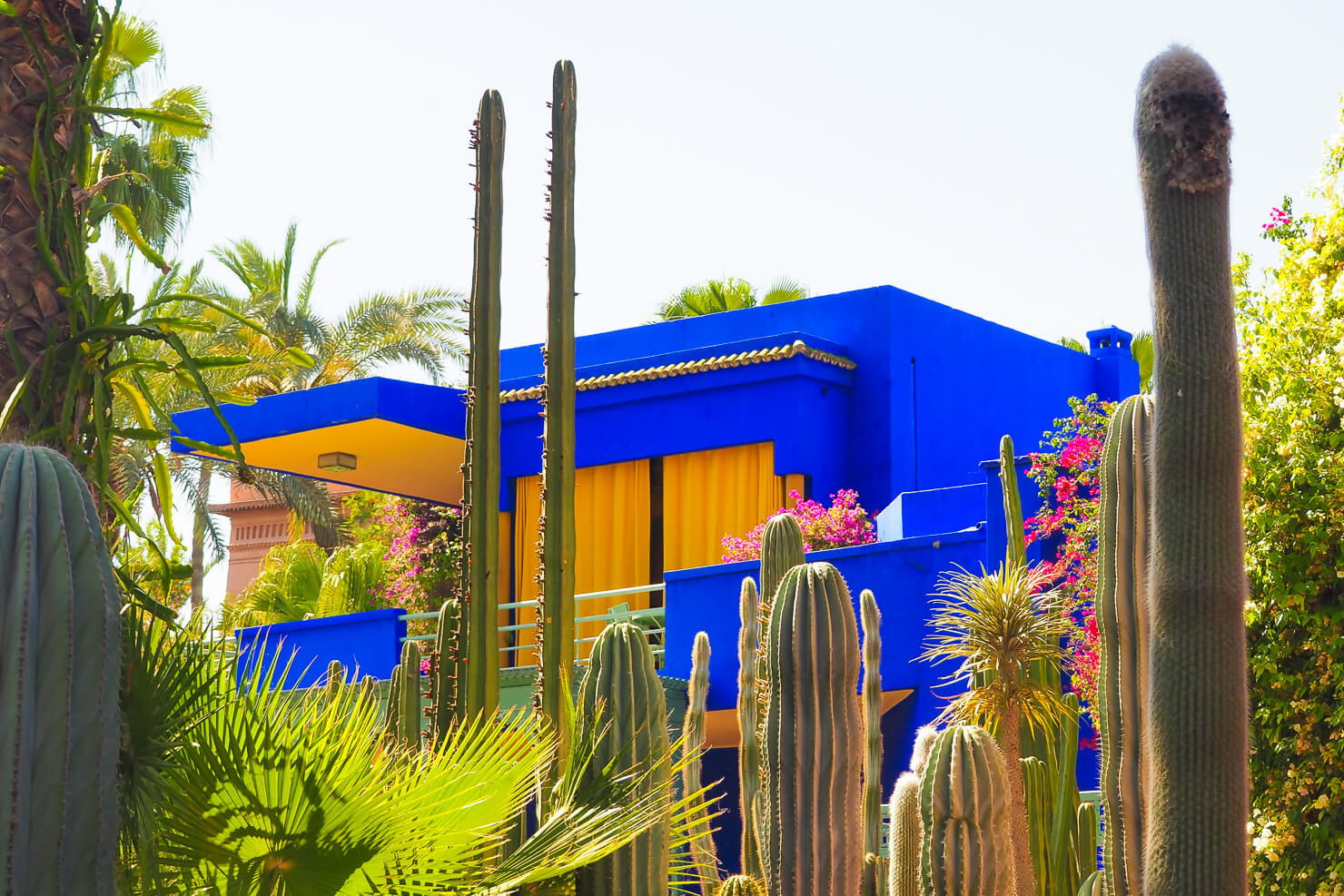 We pulled out the map and discreetly tried to make sense of where we were. I like to think I’m pretty good with maps, but Marrakech is the kind of city that refuses to be defined by a map.

After a few more directions were asked for we eventually found the square.

Jemaa el Fna is the heart of Marrakech. By day the square is home to traditional Water Sellers, Snake Charmers and men with monkeys on chains (best avoided – animal lovers you may find this upsetting) who urge you to take a picture with them. Women sit around in groups on low plastic chairs and call “Henna? Henna?” flicking through their little plastic booklets full of designs.

Side by side, day after day, street hawkers set up their almost identical carts selling freshly squeezed orange juice, a bargain at 4 dirhams a pop. The sellers called to us, wanting our business, sulking when we don’t pick them. I choose the stall with the most locals. 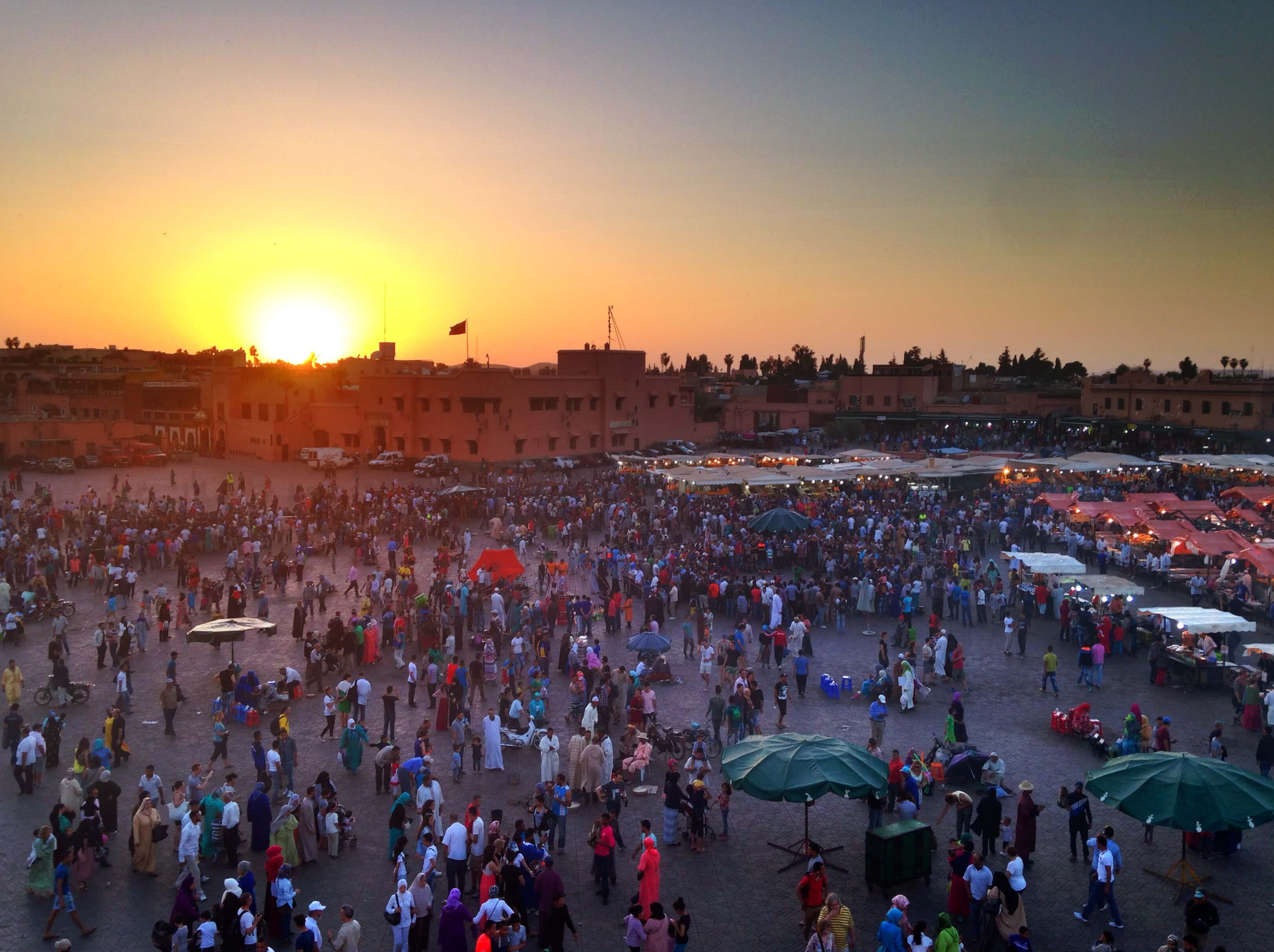 We watched the sunset from Le Grand Balcon du Cafe Glacier. The place quickly filled up with people and the sound of frantic drumming mixed with the Snake Charmers piping and traditional Berber music filled the air.

As the sky turned dark, the street performers took centre stage, surrounded by huge crowds who looked on appreciatively. But the real action was at the food stalls, each selling an array of Moroccan cuisine such as tagine (my favourite), meats, kebabs, snails, sheep’s heads, and little French cakes. I’ll let you guess which ones I didn’t try. The food stalls are cheap, cheerful, and full of both tourists and locals alike.

Once we’d had enough of the Jemaa el Fna, we made our way back to the Place des Ã©pices (with some more directions) to one of Marrakech’s most famous restaurants, Nomad.

We hadn’t booked but they squeezed us in and we sat on the rooftop as little lanterns twinkled above us and the square below began to wind down. I had the Nomad Burger, a spiced lamb burger with aubergine, caramelized onion, and harissa mayonnaise and I would highly recommend it. 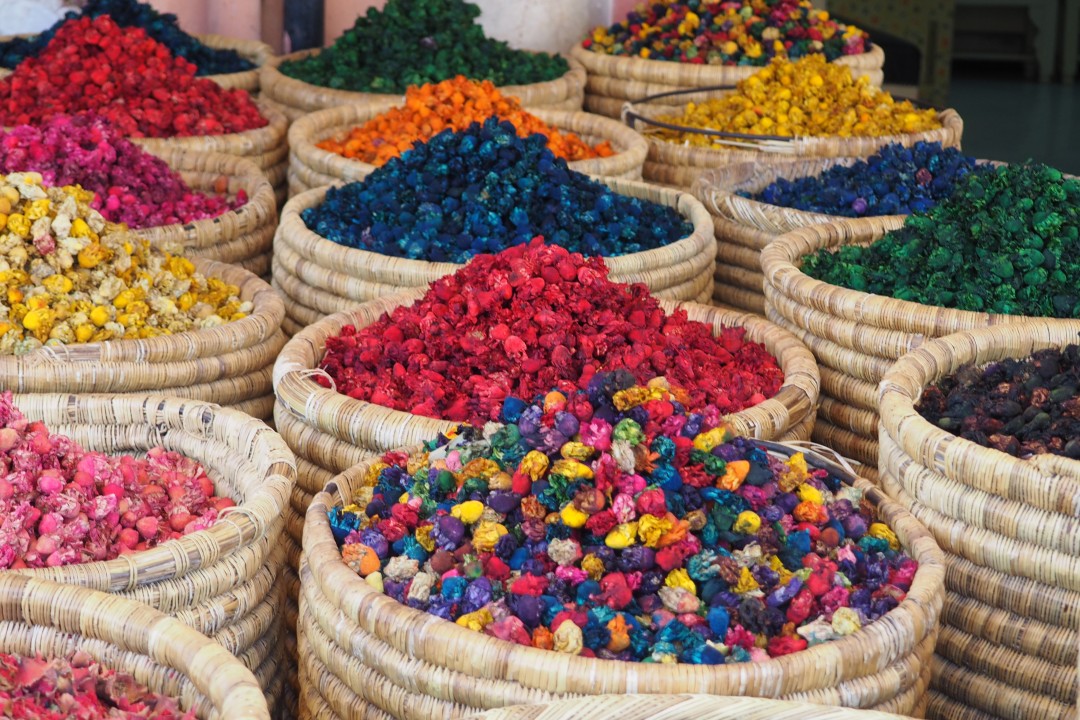 We finished eating around 11pm, and asked the manager if one of the staff could walk us back to our riad. They weren’t sure where it was, so they said they could perhaps walk us back to the square and we would get a tuk-tuk from there.

The waiter was probably no more than 20-years-old and chatted to us as we walked through the souk, which was still pretty busy, so I think we would have found our way back to the Jemaa el Fna by ourselves, but it was nice to be escorted and not have to worry about it.

Lisa asked him how on earth he found his way around? He’d grown up within the medina, so he knew it well. We told him how lost we’d been over the last couple of days, and how frustrating it had been.

He turned to us and smiled.

“But that is the charm of the city,” said the boy, “to always be lost.” 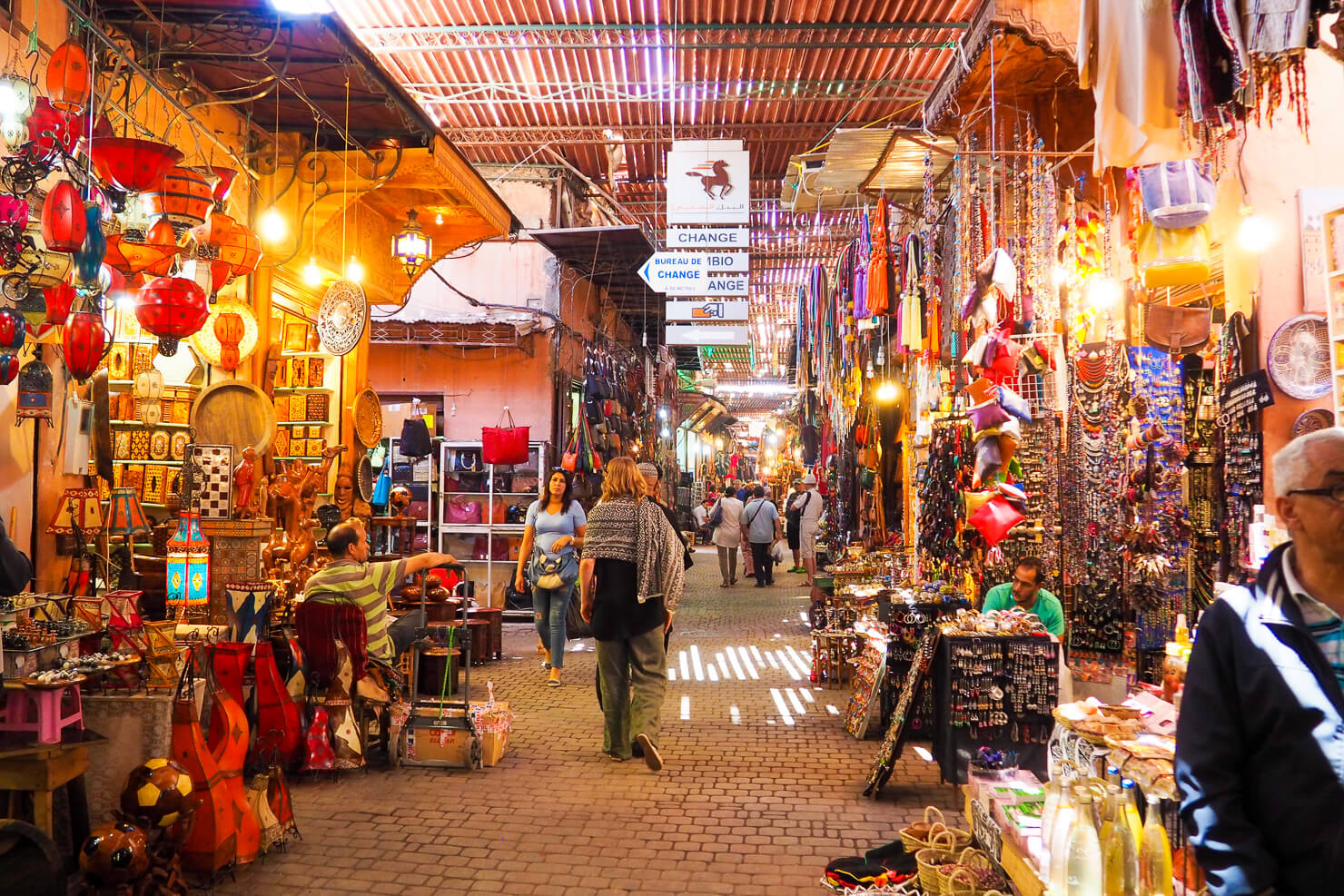 Here are a few ideas on how to spend your time in Marrakech:

Have you been to Marrakech? How did you find it? 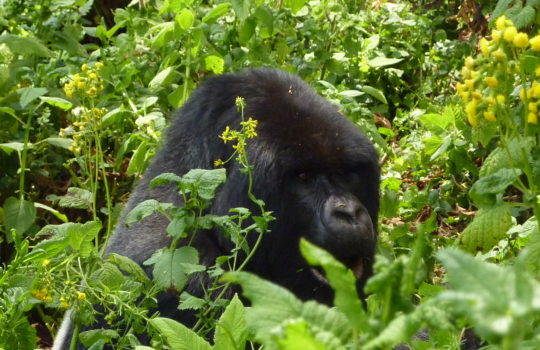 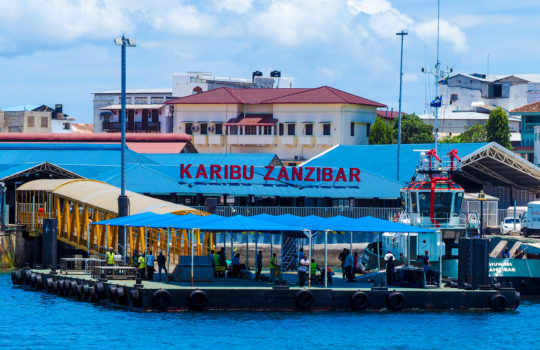 A Guide to Taking the Dar es Salaam to Zanzibar Ferry 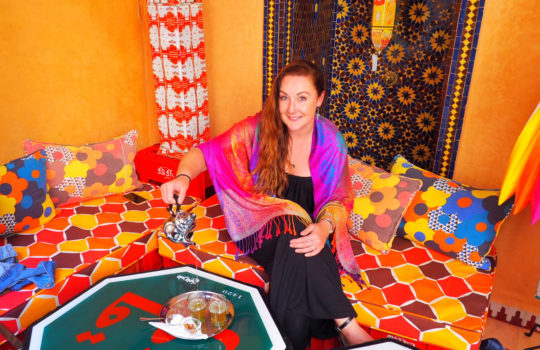 How to Stay Healthy on Your Travels