A Safari in Samburu National Reserve

The morning after we’d seen theÂ women of the Samburu Tribe and scared ourselves sillyÂ going for a wee in the middle of the night, weÂ took a drive through the Samburu National Reserve in Kenya – one of 34 protected areas in the country. It was my first ever safari. 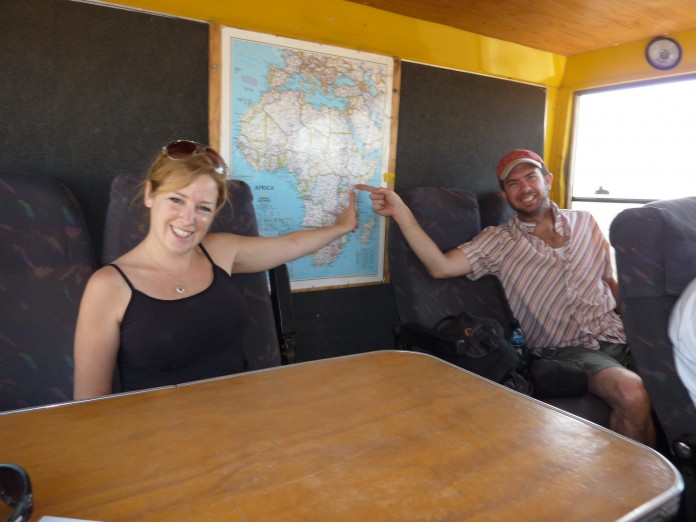 We’d all come in the hope of seeing African animals in the wild, especially the Big Five – elephants, buffaloes, leopards, lions and rhinos.

Would we see them today? 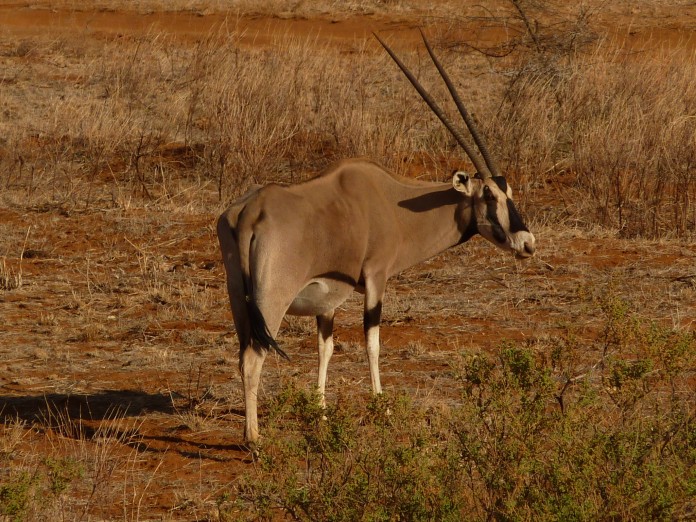 The animals that we saw first and most in numbers were antelope. Impala, waterbuck (below),Â Kirk’s dik-dik (which are teeny weeny – like the size of a dog), Grant’s gazelleÂ and my favourite the East African oryx (above). 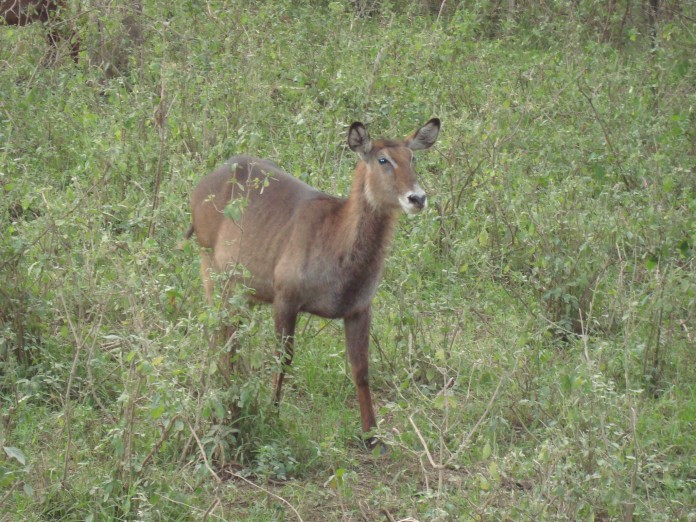 Samburu NationalÂ Reserve was much quieter than any of the other safaris we did during our trip, and we barely saw any other vehicles. It was the dry season and the land was very dry. The Ewaso Ng’iro (sometimes spelt and pronounced Nyiro)Â River running through it provides a lifeline to the animals and people in the area.

Camping near to the river the previous night,Â Moses had warned us there were crocs and hippos nearby so we weren’t to go near it. Taking my (cold) shower that evening in the darkÂ , in the open air shower block, with the stars overhead,Â  I could hear the hippos grunting softly in the distance, even if I couldn’t see them. They were making their usual grunting noises, which sound like a cross between a sea lion, a cow and a duck. It’s a strangely nice sound.

Hippos, whilst generally quite docile, are extremely dangerous, killing more people than any other large animal.Â I wasn’t going to risk a midnight swim. 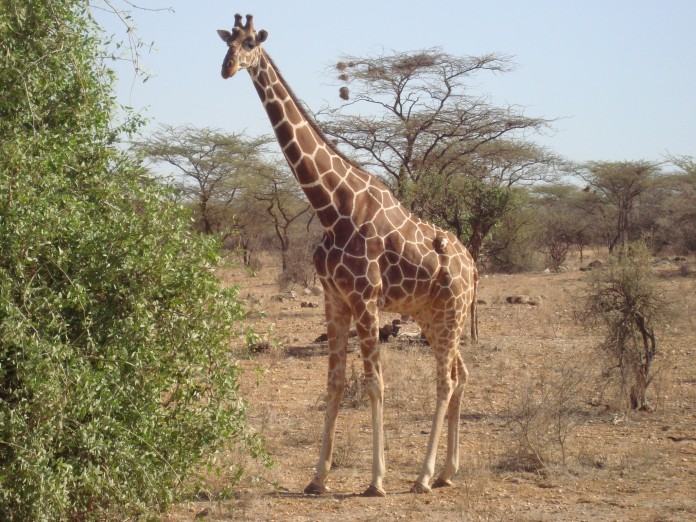 We thenÂ saw giraffe. Reticulated giraffe to be exact.Â Which, if you follow my Instagram (@helenwonderlust),Â you’ll see is different from the Thornicroft’s giraffe from South Luangwa in Zambia. 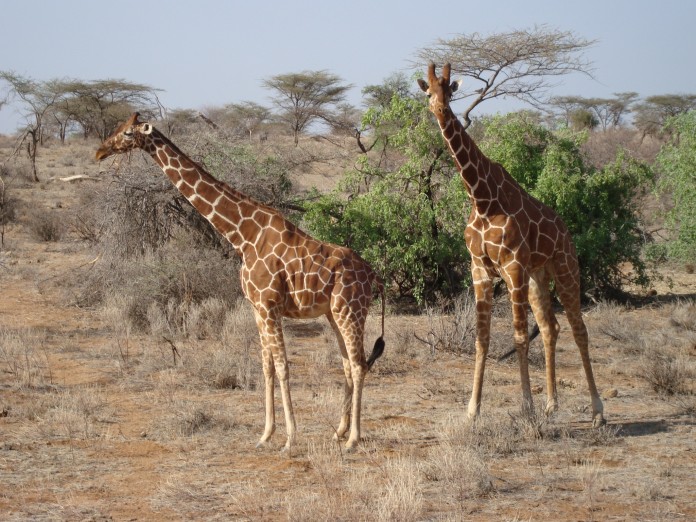 The thing that struck me first is how prehistoric they look. They are so strangely fascinating you can barely take your eyes off them. And if you see them drink water or run – you’re in for a treat! 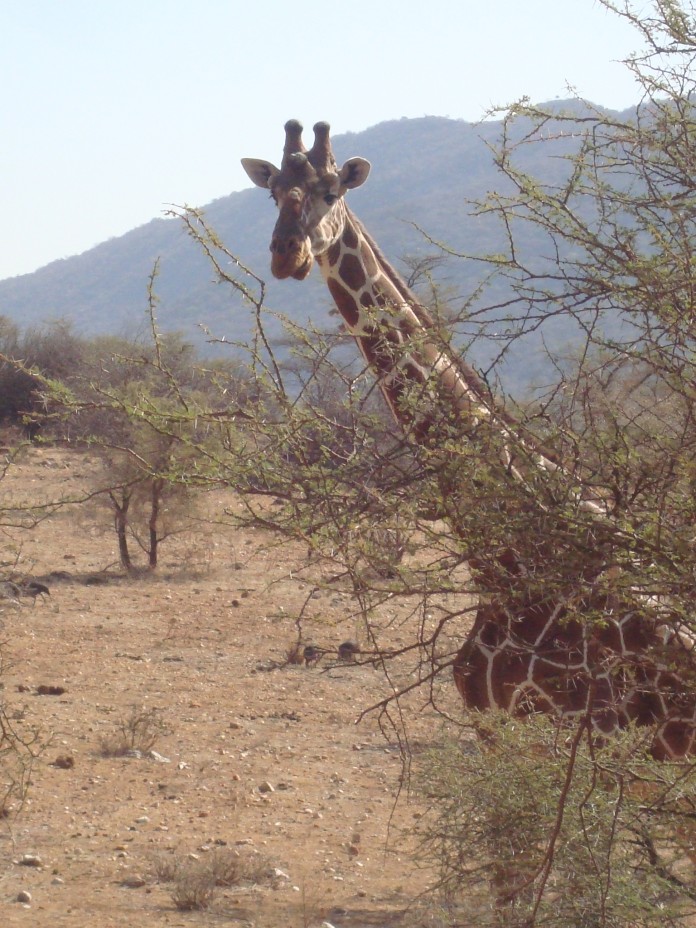 We caught a glimpse of the first of our Big Five,Â a buffalo. Their appearance is deceptive. No larger than a really big cow, they look calm, but their eyes tell a different story. They look mean. Yeah, grumpy, mean big brownÂ cows.

The Big Five are so called notÂ because they are the biggest animals, because the giraffe would win that one. They are called that because back in the day, when hunters went out on foot, these were the most dangerous and difficult to catch. 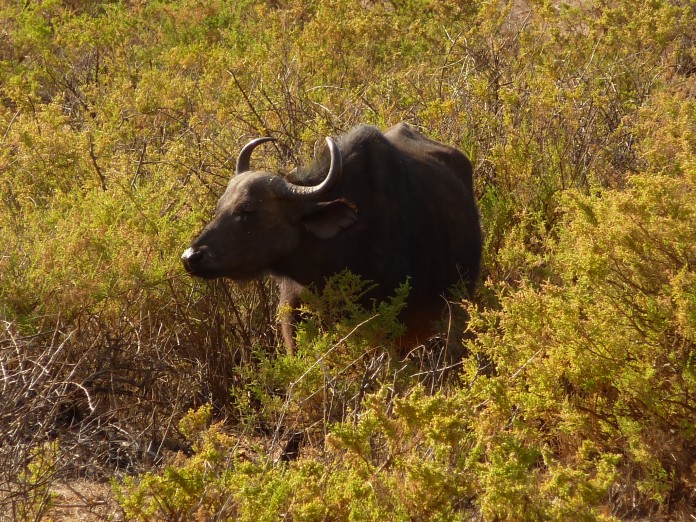 Did you ever see the video of The BattleÂ at Kruger? AÂ group of female lions catch a baby buffalo, but whilst doing soÂ accidentally knock it into the river. Whilst they were trying to pull it out, a crocodile joins in, wanting his share of the feast. A dramatic tug of war between the lions and crocodile ensues. Eventually theÂ lone crocodile gives up and the lions pull the baby on to the bank.

All the while the other buffaloesÂ are hatching a plan.Â In a unified attack, they chase off the lions one by one, even tossing one high into the air. The last remaining lions let go of the baby, who runs back into the safety of the crowd. Quite possibly the most dazzling displayÂ the animal kingdom has ever seen.

You DO NOT mess with a buffalo. 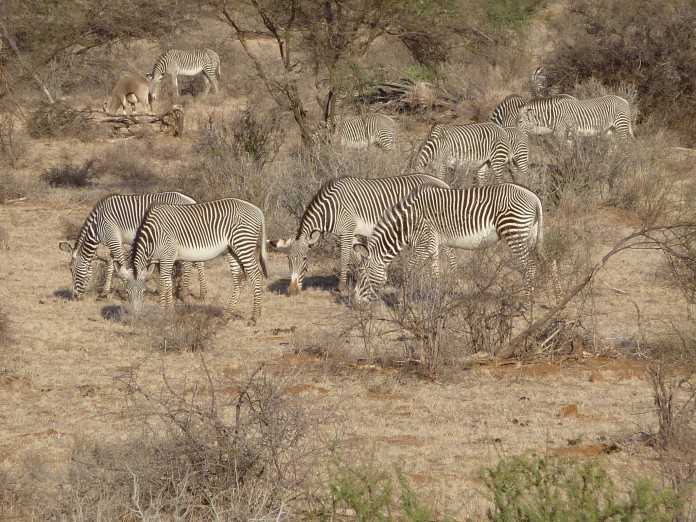 Then there was a Grevy’s zebra. One of three main types of zebra found in Africa. You’d be surprised at how well black and white stripes can hide amongst the greens and browns of the plain. Perfect for avoiding predators. 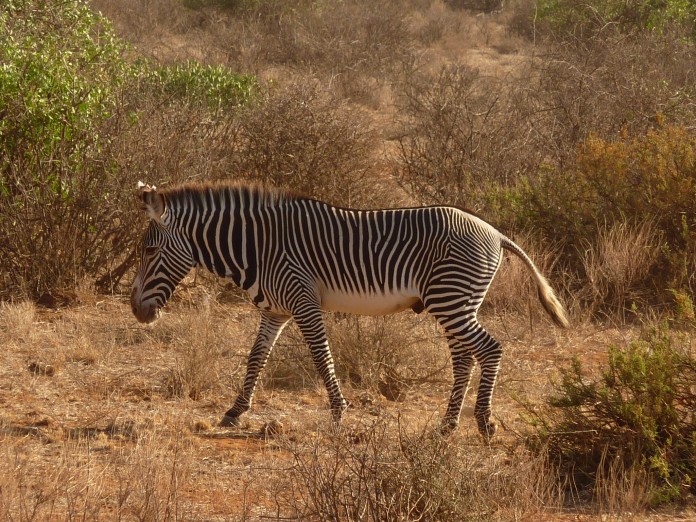 Then, we saw them. The one we’d all been most keen to see – elephants. There wereÂ a few,Â quietly munching on some very dry looking tree branches. 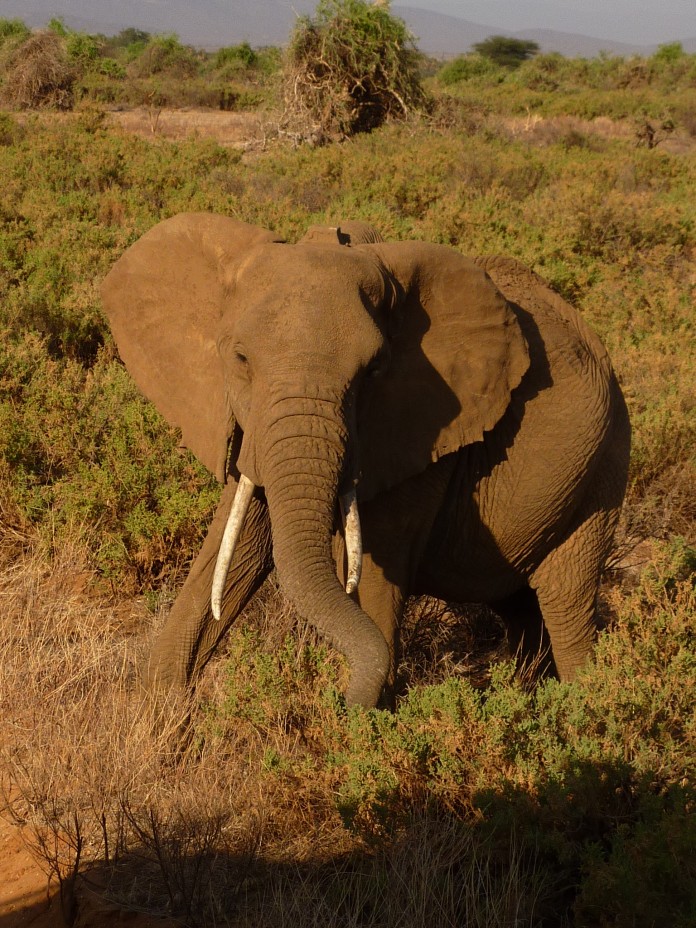 Both male and female African elephants can growÂ  tusks, which are actually just two of their teeth. Although due to ivory poaching, tusks are becoming much less common amongst elephants. 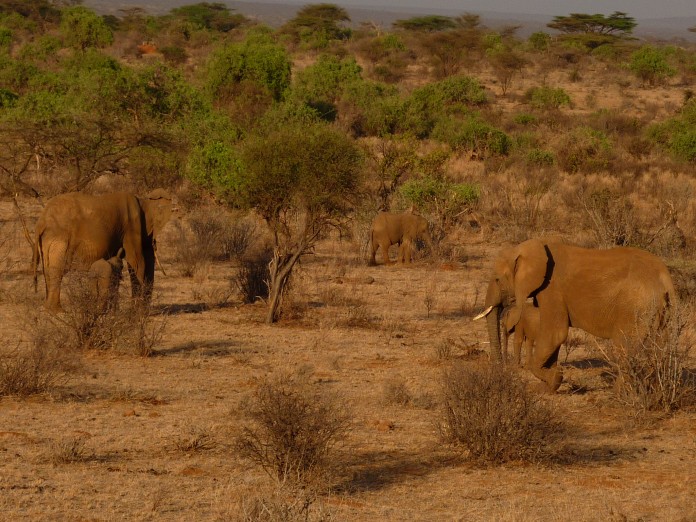 The smile on my face says it all. There were 20 other people on that truck with matching grins. 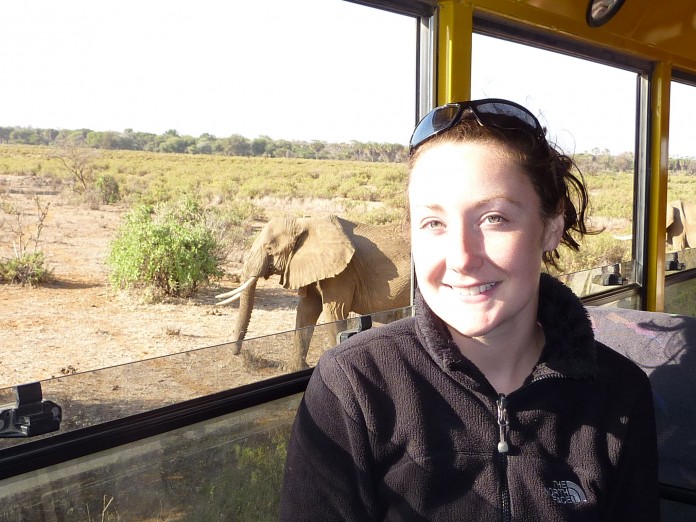 African elephants are bigger than Asian elephants, and have much bigger ears. Their ears are multi-purpose, acting as both a warning device to others (to back the hell off), listening for predators, and as a cooling device. When an elephant feels angry or threatened, it’s ears begin to twich. Trust me, if you are doing a self-drive and you see that… back away slowly. Unless you want this to happenÂ – see howÂ his ears come forward? If these people had a guide, I will eat my hat! They were far too close.

We saw an abundance of birdlife too… but they’re a whole different kettle of fish! Believe me, Africa will turn you intoÂ birdwatcher.

We didn’t see any big cats or rhinosÂ that day, but with two months left on the truck, and quite a few other national parks toÂ visit,Â I was hopeful I’d still see them. 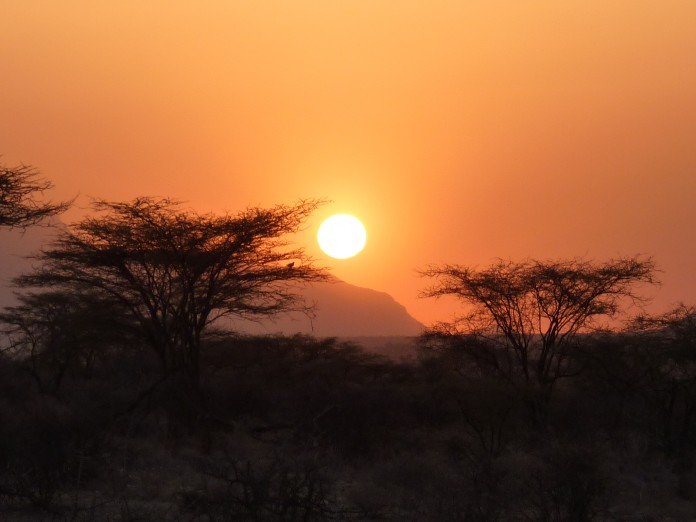 TheÂ sun set, casting a glow of orange over the landscape, as far as the eye could see. We were truly in Africa.

Have you been on safari? How did it make you feel? Or would you like to go? 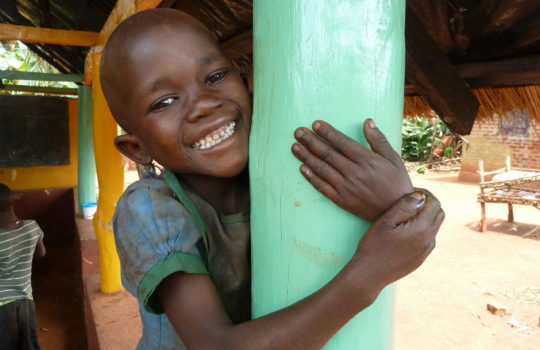 A Very Special Easter in Uganda 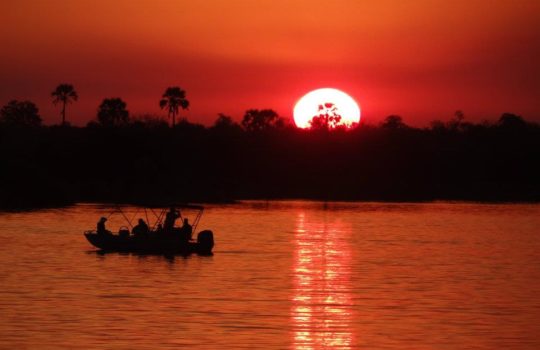 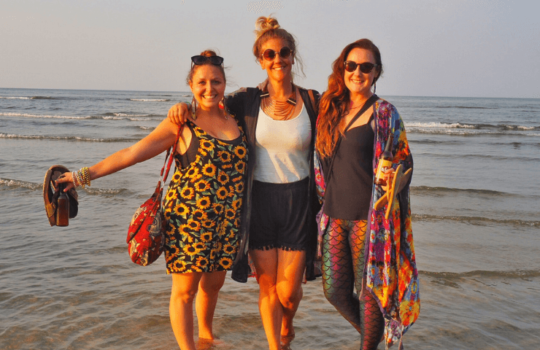 Where to Find the Best Festival Clothing, Accessories & Makeup Brands